BMG will be in Hopkins for Mango Festival!

Saturday, May 30th 2015. Aaron Humes Reportring: According to the most recent international survey on drug use, some 12.3% of Belizean youth aged 12-15 have taken up tobacco smoking, and about 6.5% have smoked an electronic cigarette, a new trend.

But the harmful and eventually lethal effects of tobacco, which can cause lung and other cancers, emphysema, bronchitis, amputations of affected limbs, damage to eyesight and other body parts and eventually death, are well known. So then, knowing this, why are Belizeans taking up smoking and continuing to smoke?

He told us that young people at that impressionable age can be prodded into taking up smoking by their peers or even other family members on the basis of it “looking cool,” or trying to impress girls or other targets.

The good news is that once properly educated about the health risks of smoking, they will try to quit – 7 in 10 express an interest in stopping and 6 in 10 have done so.

The survey on global drug use, including of alcohol, marijuana and others, will be officially released in June. Today’s display was attended by groups of schoolchildren approaching the age group identified as first to participate in smoking. NDACC, says its director Esner Vellos, will be more proactive in addressing youth and tobacco issues. 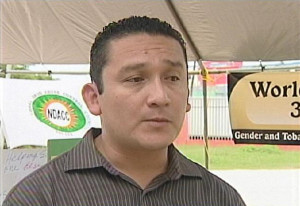 According to Vellos, it is time to treat tobacco as any other drug – to campaign for the reduction and eventual cessation of usage of cigarettes and other forms of tobacco, including the e-cigarette.

Vellos said that makers of e-cigarettes have touted them as effective in lessening the urge to smoke – but there is no scientific evidence to prove such.

The celebration was moved up from the usual date of May 31 due to its placement on the weekend.