Sunday, May 31st, 2015. BMG: Eye witnesses are scheduled to take the stand on Monday, June 1st at the Corozal Magistrate Court in the NohMul case against D’Mars Stone Company Limited.

On June 28th, 2013, owners of the company Denny Grijalva and his wife Maria, along with foreman Javier Nuñez and excavator operator Emil Cruz, were escorted to the Corozal Magistrate Court to face charges.

All four pleaded not guilty to the charges and were offered bail in the sum of $5000 plus a surety in the same amount.

NohMul, translated as “great mound” is the most important Maya site in northern Belize. The site included a large pyramid, about 17 meters (56 ft) tall before excavation. It was built around 250 BC.

NohMul is a pre-Columbian Maya archaeological site located in what is today northern Belize and is the most important Maya site in that part of the country. 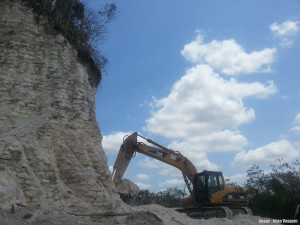