Wednesday, June 3nd, 2015. Chrisbert Garcia Reporting: The game “Charlie Charlie” which has racked up millions of views on the popular internet site ‘YouTube’ has sent waves of panic across the country over the past few weeks.

As you may know by now, the game involves two pencils placed in the shape of a cross on top of a piece of paper with the words ‘Yes’ or ‘No’ written on it.

Charlie, an unknown entity, is then asked if she is there or if she can play, after which one of the pencils move toward Yes or NO. It has been reported all over the country that this game has caused demonic possessions in children who played it and the churches have spoken against it saying that it is evil. 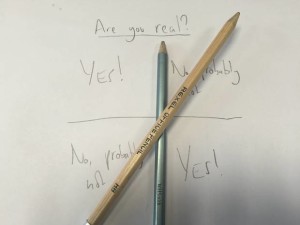 Allegations about schools sending children home and bags floating in classrooms after playing ‘Charlie Charlie’ have turned out to be false but the latest allegation about a school in the Toledo District has been confirmed to be true.

Julian Cho Technical High School which is located about 10 miles away from Punta Gorda Town, is the second largest high school in the Toledo District and with this ‘evil’ game reaching into its classrooms, the school’s administration allegedly decided to expel/suspend students caught playing ‘Charlie Charlie’ at school.

Belize Media Group spoke today to a student from Julian Cho who confirmed that at least one student has already been suspended for playing the game and any others caught playing will be issued the same punishment.

When asked why the school was suspending students, the student said they were told that: “the school does not tolerate nonsense”.