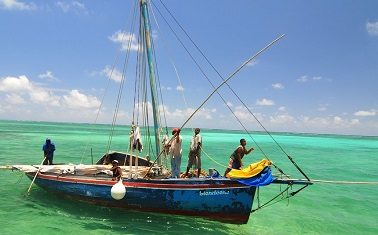 Thursday, June 4th, 2015: BMG: An article entitled: “How Belize is tipping the scales for sustainable fishing worldwide,” posted yesterday, June 3rd, 2015 by Amanda Leland on an American website, commends Belize for good fishing practices and setting a trend for other countries to follow. This article, on the “Environmental Defense Fund” website (www.edf.org), reads: “Belize just redefined marine conservation, entrusting its fishermen with a nationwide system of multi-species fishing rights for all its coastal fishing waters. This landmark decision is a victory for communities on Belize’s Caribbean shore, allowing fishermen to create more food and jobs on land by replenishing more life and diversity in their seas. But Belize’s move also has implications for the rest of the world. The government blazed a pioneering trail, with a powerful example that may prove a tipping point for sustainable harvests of coastal fisheries anywhere.

It transformed fishermen into responsible, long-term stewards of the sea. And recovering fish populations reward adherence to limits with longer seasons, lower risks, higher revenues, better product and more full-time jobs.
But it begged the question: Can it scale?

If fishing rights worked wonders for hundreds of commercial fleets in more developed, industrialized fisheries, could it also transform thousands of smaller fisheries in warmer near shore waters, where most fishermen live and work? In May 2015, Belize answered with a resounding yes. Fishermen want change.

Belize raises the bar when it comes to marine conservation. The extraordinary Belize Barrier Reef, second in size only to Australia’s, hosts a rich diversity of mangroves, corals, sea grass and cayes teeming with life. Offshore life also brought onshore health. As 3,000 fishermen harvest spiny lobster, conch and reef fish, they nourish Belizeans with an important source of healthy, locally-produced animal protein. Yet fishery managers struggled to overcome illegal fishing that created a “tragedy-of-the-commons” dynamic of perverse incentives, which can bring a vicious spiral of depletion, poverty and food insecurity.

Transition to fishing rights means change, and change can feel scary. But when Belize officials held workshops reaching out to the country’s fishermen, they heard an eagerness to expand the program nationally, as soon as possible. The government heard from the communities and responded. The country’s ministers voted for a policy that will yield more food on the plate, more fish in the water and more prosperous local communities.

Which nation will be the next to reform its fisheries?”