Attorney and magistrate to be suspended for unethical practices

Friday, June 5th 2015. Aaron Humes Reporting: Two prominent members of the legal profession face suspension for reported unethical practices. One is a former area representative who admitted to bribing certain officials to ensure his client would get bail for minor offenses; the other is a long-time magistrate who is alleged to have used his office to give a biased ruling in favour of a woman with whom he was in a relationship.

The attorney, named in other media sources, has been recommended for one year’s suspension by the General Legal Council, which hears cases against attorneys accused of unethical practices, but the case must be finally decided by Chief Justice Kenneth Benjamin. 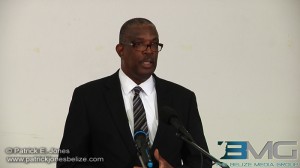 The attorney is accused of taking money from the mother of a non-Belizean client charged with unlawful possession of a passport and escape from lawful authority to not only secure bail on the latter charge in 2013 and pay his fine on the former charge, but also to pay certain persons close to the magistrate hearing the case to expedite bail, at the request of his client. However, the mother did not buy the story and made a complaint to the Council, which just recently starting meeting. That body met and heard the case and made the recommendation to the Chief Justice, who will consider it in finally deciding the case.

The Magistrate is reported to have begun a one-month suspension this week after being found guilty of using his authority as Magistrate to favorably influence the outcome of a case, which had an obvious appearance of bias. After the relationship began in 2013, the Magistrate’s partner took her husband to court for child maintenance and varied visitation orders. Defying requests and orders to recuse himself from the case, the accused Magistrate handed down orders in favour of his partner. The other man tried without success to see the Magistrate about the case and the Magistrate complained to police which resulted in lockdown but no charges. The other man then made an official report and the Chief Magistrate gathered evidence and lodged a case with the Judicial and Legal Services Commission, which heard the case and gave its ruling earlier this week. The suspension exacerbates a recurring problem with lack of Magistrates to hear cases, with no magistrate present in Cayo or Orange Walk and just four here in Belize City. The Chief Magistrate has been traveling the country hearing cases from other jurisdictions.