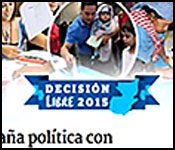 Monday, June 8th, 2015. Aaron Humes Reporting: Sharp eyes spotted an advertisement on the website for top Guatemalan newspaper Prensa Libre recently in advance of Guatemalan general elections in October and November which appears to join Belize to a map of Guatemala.

The erroneous image appears in the ad for Decision Libre 2015, the newspaper’s effort to educate voters about the electoral campaign. However, it appears to misinform Guatemalans about Belize’s status with Guatemala and reminds how ingrained the concept of “Belice es nuestro” is in Guatemala. 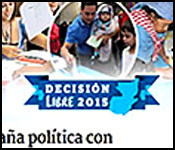 The newspaper has published other logos without Belize in the map but this particular one is still up on the website.

Guatemala is planning a referendum on taking the dispute to the International Court of Justice (ICJ) at the same time as the election, after an amendment to the Special Agreement between the two countries last month.