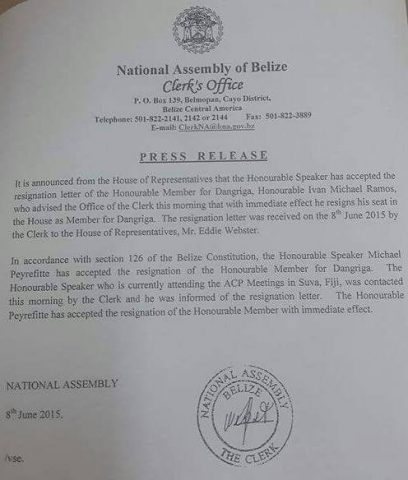 Monday, June 8th, 2015. BMG: The National Assembly of Belize has issued a press release informing the nation about the resignation of the Honorable Ivan Ramos, PUP area representative for the Dangriga Division from the House of Representatives. 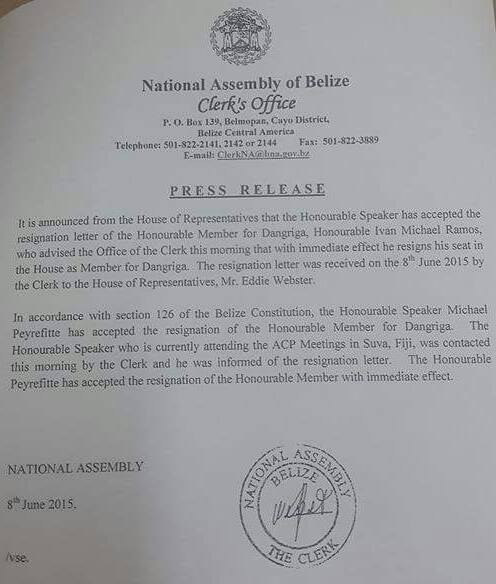 According to the release, the letter of resignation was received this morning by Mr. Eddie Webster, the clerk of the House of Representatives.

“In accordance with section 126 of the Belize Constitution, the Honorable Speaker Michael  Peyrefitte has accepted the resignation [with immediate effect] of the Honorable Member of Dangriga,” states the official release.

Hon. Ramos is the second PUP parliamentarian to resign from the House of Representatives in less than a year. Last year in November 2014, Hon. Joseph Mahmud resigned his seat for the Cayo North division.

Today’s resignation of Ivan Ramos and the acceptance of the resignation by the Honorable the Speaker automatically triggers a bye election to choose a new representative for Dangriga.

As to when that by-election will be held, that is a matter the specifics of which are to be announced by the Election and Boundaries Department.