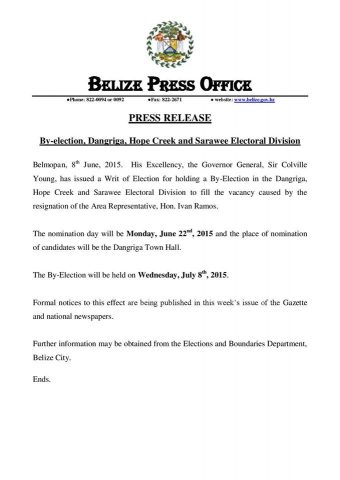 Monday, June 8th, 2015. Aaron Humes Reporting: The Government is moving quickly to take advantage of the sudden resignation of Ivan Ramos, Dangriga representative, calling a by-election for the seat to be held on Wednesday, July 8. 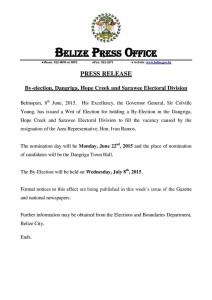 The Governor General, Sir Colville Young, has signed a writ for election of a member to the House of Representatives in the event of resignation, designating Monday, June 22, as nomination day for candidates at the Dangriga Town Hall.

If, as expected, more than one candidate is nominated, the vote will be held from 7:00 a.m. to 6:00 p.m. on July 8 and counting at the Town Hall on July 8 beginning after 8:00 p.m. The UDP are expected to nominate Frank “Pawpa” Mena, a former Mayor of Dangriga Town, while the PUP will nominate Anthony Sabal, an experienced teacher.

As of March, 2015, according to the Election and Boundaries Department, Dangriga has 6,265 voters in eight polling areas, four of which comprise Dangriga Town proper and the others in the villages of Hope Creek and Sarawee along the Stann Creek Valley Road.

This is the second by-election called in 2015 after January’s victory for Omar Figueroa in Cayo North, who defeated Richard Harrison after Joseph Mahmud resigned the seat.