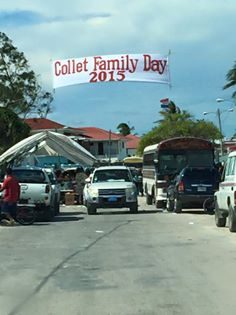 Thursday, June 25th, 2015. Aaron Humes Reporting: The infamous statement by Collet area representative and Minister of Education Patrick Faber at the endorsement convention for Darrell Bradley in Caribbean Shores earlier this month still resonates, as many wonder how a national official could be so cavalier about spending of public funds? How does a Minister of long standing explain spending gobs of money on a selection of his constituents with no apparent paper trail?

The press has waited several weeks to catch up with Hon. Faber to ask him these questions and more, and today the chance finally came. And thankfully, the Minister seemed to have all the answers at hand, not to mention bemused indignation at such an apparent non-story.

The party cost $36,000 – food, transportation (not including $3 bus fare for participants) and entertainment by two live bands. The Caribbean Sea and Corozal beach was free, of course.

An additional fourteen thousand was spent on a “seniors’ day” for 200 Collet residents at Birds’ Isle in Belize City.

While with a total of 12 to 15 thousand residents in the division, not everybody can and will attend these events; there were some avowed PUP supporters who attended and were welcomed by the area representative personally. There was no alcohol bought for either event, as some have reported, and the constituency accepted some donations as well.

According to Faber, the spending falls within the ambit of the program, which includes social initiatives such as these events. For him it is money well spent, as it provided a unique experience for residents of the hemmed-in urban constituency and gave the area representative a chance to connect on the ground with those who he will ask to vote for him in the next general elections. Faber does not plan to apologize for his attention to his constituents, both red and blue, with which he credits his success as a three-term representative seeking a fourth.

Faber maintains that this type of politics is not meant to be divisive. We asked him whether the time and place of the announcement contributed to the backlash against him and he made it clear that he believes it is so, but maintains that it should not have been.

Faber says he has promised constituents a trip to Hopkins next year if Petrocaribe funds are made available again.