PUP say Speaker had no right to remove Andrews 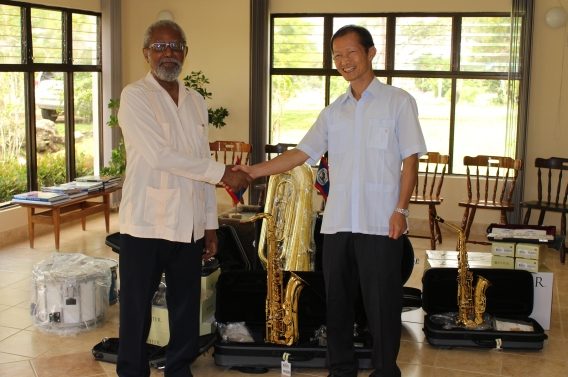 Monday, June 29, 2015. BMG: Governor General of Belize, Sir Colville Young, received marching band instruments worth over US$25,000 which will be donated to two schools in Cayo and Belize District as part of the Music in the Schools program. Sir Colville is a trained musician and composer in addition to literary and academic pursuits. He has selected St. Andrew’s Anglican Primary School of San Ignacio Town, Cayo District, and Anglican Cathedral College (ACC) of Belize City to share the instruments, as each school has a good music teacher whom he judged able to work with the students to put the instruments to good use.

The instruments were presented by Ambassador of the Republic of China (Taiwan) to Belize H.E. Benjamin Ho to the Governor General at Belize House, Belmopan. In return the G.G. presented as a gift two copies of the Belizean musical folk play, “Tiga Dead,” performed by the Capital Culture Drama Club of Belmopan, directed by Beverly Swasey.