PM answers PUP questions about Guatemalans being given citizenship

Buena Vista Water Board Under Investigation 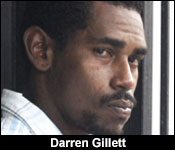 Thursday, July 02, 2015. BMG: Police constable Jason Hall was traveling from his home in Corozal to work in Belize City when one of his vehicle tires blew out and a man who appeared to be a Good Samaritan stopped to render aid.

That man then waited for the opportune time to assault the officer with a gas tank and stole his Silver Mazda car which he used to flee to Belize City. The assailant was later identified to be Darren Gillett who was caught yesterday, July 1st by police. 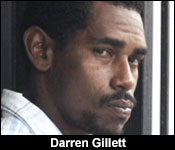 Gillett was arraigned in court before Chief Magistrate Anne Marie Smith, facing charges of attempted murder, dangerous harm, use of deadly means of harm and harm. The prosecution’s objection to revoke bail was upheld by the Chief Magistrate since Gillett had escaped from police custody and Hall is still in critical condition at the KHMH.

A cell phone valued at $450, $400 in cash and some personal documents were also stolen from Officer Hall along with his car which was valued at $13,500.