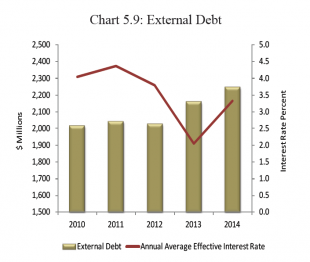 Friday, July 03, 2015. Aaron Humes Reporting: The Central Bank of Belize reports that at the end of 2014, Belize’s national external debt was closing in on $2.3 billion, with some $84 million due on the cumulative interest rate of 3.7%.

The restructured 2008 “Superbond” now stands at 46.8% of the total external debt, with the next largest figure being loans from multilateral institutions including the Caribbean Development Bank (CDB) and the Inter-American Development Bank (IDB) at 28%. 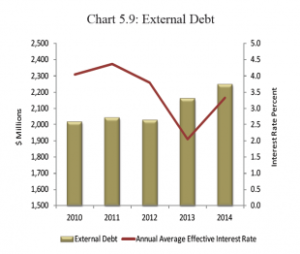 Venezuela, through the Petrocaribe program, has now overtaken the Republic of China (Taiwan) as Belize’s largest bilateral creditor. A quarter of the national debt is from bilateral funding agencies, and Venezuela’s disbursements to Belize totaled $115.7 million, an overwhelming 97.9% of all disbursements and two-thirds of all foreign borrowing during 2014. Venezuela holds over half of the bilateral debt stock.

Bilateral disbursements were used for budgetary support and to finance several investment and infrastructural projects, including the National Bank, the Golden Stream Big Falls border road project, the Corozal border rehabilitation, and upgrades to the national road and drainage networks.

According to the report, at $153.2 million, debt service payments were $29.4 million higher than the amount paid in 2013. Principal payments remained relatively stable at $79.0 million, while interest payments saw a resurgence to $73.6 million due to the resumption of bi-annual interest payments on the 2038 Restructured Bond, the Central Bank said.

Central Government repaid $31 million to bilateral lenders, most of which went to Taiwan, and $36.5 million to multilateral creditors, mainly the CDB and the IDB. The financial public sector, namely the Development Finance Corporation (DFC) and the Central Bank, made respective repayments of one million to CDB and $1.8 million to the International Monetary Fund (IMF) to retire the Emergency Natural Disaster Assistance loan.

The non-financial public sector paid $4.1 million to the CDB and $3.9 million to commercial suppliers.

At the end of 2014, Central Government accounted for 96.5 percent of the outstanding external debt, and the financial and non-financial public sector for 2.6 percent and 0.9 percent, respectively.

During 2015, the report said, $0.6 million of the present portfolio is scheduled to mature, and $178.3 million will mature during the next ten years, leaving $2 billion of the national debt with a maturity schedule that exceeds ten years.