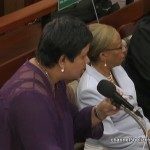 Development, has accused Maya leaders of undermining the court order issued by the Caribbean Court of Justice in May concerning what rights they hold over lands within and surrounding the Maya communities of the Toledo District.

According to the Senator, President of the Toledo Alcaldes Association (TAA), Alfonso Cal, told villagers in Indian Creek that “they have every right to go into any protected area, including any private protected area and stake claim, because all those lands belong to them,” which in fact, she said, they do not. She went on to add that certain persons are disrupting pegs for surveyed and documented land in Pueblo Viejo. Sen. Alamilla was responding to Sen. Lisa Shoman, who spoke on the adjournment of the Senate at its meeting on Wednesday about the recent tensions between Maya and members of other ethnic groups, as demonstrated with the recent incident in Santa Cruz village involving Rupert Myles.

According to Senator Shoman, the Government has chosen not to act on the order, and in fact has sought to downplay the Mayas’ claims to their land by denying their indigenousness to Belize – experts at trial claimed that a majority had in fact settled from Guatemala.

Senator Alamilla, who has been asked to head a Commission designed to look at the issue of Maya land rights, insisted that the Maya and their supporters should not pretend to seek a solution.