Man gets electrocuted in Spanish Lookout 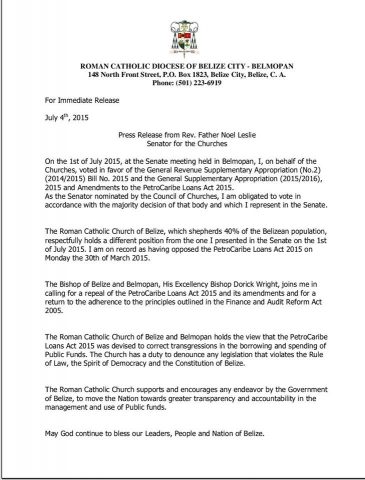 Saturday, July 04, 2015. BMG: This evening, Rev. Father Noel Leslie, Senator for the Churches issued a press release explaining to the nation the position of the Roman Catholic Church of Belize regarding the PetroCaribe Loan Acts 2015. According to Rev. Father Noel Leslie, he has an obligation to vote in accordance with the majority decision of the body which he represents in the Senate; however on July 1st, he voted in favor of the PetroCaribe Loans Acts 2015 even though the Roman Catholic Church of Belize and Belmopan held a different position.

“The Roman Catholic Church of Belize which shepherds 40% of the Belizean population respectfully holds a different position from the one I presented in the Senate on the 1st of July 2015,” says Rev. Father Leslie in the press release.

The statement goes on to say that the Bishop of Belize and Belmopan, His Excellency Bishop Dorick Wright together with Rev. Father Leslie call for a repeal of the PetroCaribe Loans Act 2015 and its amendment and for a return to the adherence and to the principles outlined in the Finance and Audit Reform Act 2005.

“The Roman Catholic Church of Belize and Belmopan holds the view that the PetroCaribe Loans Act 2015 was devised to correct transgressions in the borrowing and spending of Public Funds. The Church has a duty to denounce any legislation that violates the Rule of Law, the Spirit of Democracy, and the Constitution of Belize,” adds the press release.

The release ends by saying that “The Roman Catholic Church supports and encourages any endeavor by the Government of Belize, to move the Nation towards greater transparency and accountability in the management and use of public funds.”