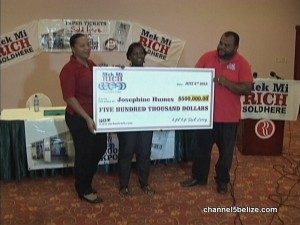 As you can imagine, she is happy beyond belief and aims to put the money to good use – buying her own house and putting her grandson through college.
The program features multiple street challenges and promotions for smaller sums but the main attraction is the big draw for half a million dollars, the biggest static prize in Belizean lottery history.

Viewers can either purchase a chance on their cell phones or paper tickets at their nearest retailer.