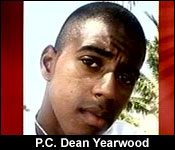 Thursday, July 9th, 2015. BMG: The family of deceased Police Constable Dean Yearwood took the Government of Belize, the Belize Police Department, the Commissioner of Police and Officer GlenWayne Grant to court yesterday for what they claim to have been the unlawful and unnecessary death of their loved one in a shooting incident that

And as a result, Yearwood’s family is requesting compensation after Dean was shot and killed by another officer, GlenWayne Grant who said that he did not know Dean was a police officer and that he had only responded with gunshots after Dean shot at him.

It is alleged that the off duty and un-uniformed Yearwood was walking in down-town Belize City when a man named Brian Velasquez attempted to rob him and that’s when Yearwood pulled out his police issued .38 revolver and shot at Vasquez.

PC Grant, who was also off duty and un-uniformed was passing nearby and saw the incident unfold. He then took out his police issued weapon and fired more than 10 shots, one of them hitting and killing PC Dean Yearwood.

PC Grant’s version of the series of events was disputed in court yesterday by Yearwood’s father, Dean Yearwood Senior and Ryan Swift when they were called to the stand by their legal representative, Phillip Palacio.

Although the police commissioner had already stated that Dean’s death was not murder, the family refuses to believe that theory.