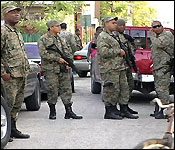 Monday, July 13, 2015. BMG: Over the weekend, Belize City’s Gang Suppression Unit (GSU) was hard at work combating crime in the city streets. Their efforts have been successful as they have rid the streets of firearms, ammunition and illicit drugs. In the first incident, after responding to a separate shooting incident on Friday night, July 10th, the GSU made a discovery of a Glock pistol along with its suspected owner, a minor, who was arrested by the officers. Shortly after 10:00 p.m that night, 21 year old Glenn Murillo was shot to his right arm on Vernon Street, Belize City and thanks to the quick response from GSU officers, coupled with a tip from a person in the area, officers searched a nearby building and found a minor fitting the description of the shooter given by Murillo.

The Glock 19 pistol along with a magazine was found near the minor in the building and as a result, he was arrested and charged for keeping a firearm without a license. Police say ballistic tests are being conducted on the weapon in an attempt to ascertain if it was used in other shootings.

In another separate incident,  (GSU) made two separate drug busts on Friday, July 10th amounting to a total of 1293 grams of Cannabis found in an abandoned building and lot.

The first bust, amounting to 895 grams of cannabis, was made 7:30 p.m Friday night when a search was conducted by officers at an abandoned lot on George Street, Belize City, where the substance was found in a plastic bag and labeled as “Found Property” since no one was in the vicinity of the lot at the time.

A second bust was made 10 minutes later at 7:40 p.m that same night when officers found 398 grams of cannabis in a plastic bag at an abandoned building on Haulze Street, Saint Martin’s Area. Again the drugs were labeled as “Found Property” since no one was in the area.

And acting on intelligence, the Gang Suppression Unit (GSU), made the discovery of a handgun and more than 10 rounds of live ammunition at a residence on Jones Street, Belize City.

The search was conducted on Saturday, July 11that around 8:30 p.m when officers visited a plywood house on the said street and were granted access inside after a short delay by the occupants to open the door. Inside the structure, police conducted a search and found 15 live rounds of 9mm ammunition in a plastic bag along with a chrome 9mm pistol containing a magazine with another 14 live rounds of ammunition.