Monday, July 13th, 2015. Chrisbert Garcia Reporting: Monday June 22nd was the last straw for residents of the St. Vincent Block community as about 20 residents of the area gathered to protect the water meter that feeds one hundred and fifty people; men, women and mostly children.

An agent representing Belize Water Services (BWS) arrived to cut off the water because of an unpaid bill that the UDP standard bearer had promised to pay before the Punta Gorda Town Council Elections. Residents explained that they were gathering, not against the agent who was carrying out his daily job, but against the injustice of being denied water.

For over two years these same community members have been broadcasting a local national and international cry for drinking water. They have no access to clean drinking water into their homes, despite being twenty minutes walking distance from Peini/Punta Gorda Town, and despite the fact that all of the water carried into town, is coming from the Garifuna communal lands of St. Vincent Block/Serru; this water has been taken out of their community by the former WASA (now BWS) since the 1980’s.

Fast forward some decades later, and still the Garifuna people of St. Vincent Block/Serru are being denied water, while not receiving a single cent for the water taken from their communal lands. Today the people speak up in defense of their right to water. They are mostly youth and they write to local newspapers, call in to morning talk shows and attempt to alert the broader Belizean society about their plight.

They live in the so-called “Forgotten District” and they are far from the cameras and pens of the major media houses, they are poor and so they pool together money for the phone credits to call and the politicians are quick to call in to defend themselves. The then-mayor claimed that the Garifuna Communal Lands was not in his jurisdiction but out of charity he would give the people a temporary water tank.

The current standard bearer along with the current mayor agreed to put in a single community pipe as a temporary solution and they agreed to pay the bill as they planned a more sustainable solution, but when the bill became too 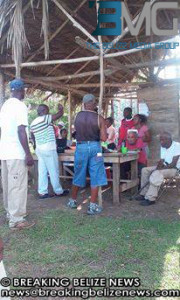 high in the driest of the dry season, the politicians refused to pay. They then sent a working class agent from BWS to cut off the water instead of going to do it themselves.

There has been no sustainable solution put in place. It is not that the community has no fault. Supporters and critics ask us why we haven’t taken the issue to court or why we don’t ask the Mayan leaders for advice in our water and land rights struggles. The people of the St. Vincent block are slowly getting organized and truly waking up, getting ready to fight for justice and the rights we deserve.

A couple weeks ago the community members, most of whom are youth, called out that water is right for children, that it is a Millennium Development Goal of member countries of the United Nations and that it is a human right that must be defended. Their act may seem small, but what they are fighting for will impact all the people of Belize, for it is not only on St. Vincent Block/Serru, that people are being denied their basic human rights.

Although many may say that the response was rash or “unruly” to have surrounded the water meter and said “No” to it being cut off, the story is a long one and when understood in its entirety, it becomes clear that the poor of this community have been left no other option. Furthermore, that the decision to come together to defend the meter, may seem small, but represents a people finally waking up and coming together to protect their inalienable rights.

Recently, the community has received support internationally from COPINH and OFRANEH, two organizations working for the rights of Indigenous peoples in Honduras, with wide networks internationally, have begun a working relationship with the people of St. Vincent Block/Serru. Recognizing the community for its importance as ancestral, communally-held Garifuna lands, they have led workshops to bring awareness to the grassroots community members so that they be more prepared to defend their rights through the judicial systems.

The community members are getting organized despite the political games played by all political parties that have ever governed in our Belize’s young 31 years. For example, the assistance from Standard Bearer Peter Eden Martinez, who put in a meter to feed the community that was much appreciated but not long after the Punta Gorda Town Council election, Mr. Martinez stopped paying the bill, leaving the poor, low income Garifuna community to pay the 900 dollars.

The community made an incredible attempt, despite been dangerously unemployed and $275 was raised to pay the bill. Even so, BWS came to deny men, women, and mostly children, water in their homes. Never once has the community cut off the water for Punta Gorda, even as the pump is housed up the road, and the main runs through the Communal Property. We want to share the wealth of water with the people of town and beyond. But we need water, too. And we, as any humans, 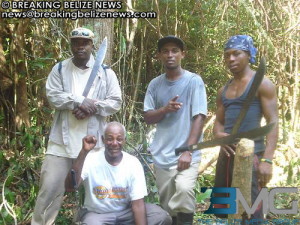 The Belizeans who have fought for the well-being of this land- the Kriol people who worked to death for the wealth of the slave nation, the Mayans who have survived genocide on their land, the East Indians who as indentured servants suffered on the cane fields– all people who have survived genocide and slavery in British Honduras, and who continue to suffer in our beautiful Belize, must be considered for our rights to land, sea access and water. These are rights that are being denied and we must organize and defend them.

If PM Barrow can push for the PetroCaribe Loans Act, making legal a lack of transparency and accountability, to be signed in 3 working days, he can sign the Convention 169 of the International Labour Organization so that we as Indigenous People can defend our rights in the courts.