Tuesday, July 21st, 2015. Aaron Humes Reporting: Established 15 years ago as a marine reserve, the Port Honduras Marine Reserve in Southern Belize has gone through its ups and downs, from incursions by Guatemalan and Honduran fishermen to ongoing beach erosion to

changes in the fish stock, while hanging over it all is the possibility of petroleum exploration.

The reserve has been carefully nurtured by the Toledo Institute for Development and the Environment (TIDE) and the many villages that are a part of it, from Barranco and Punta Gorda to Monkey River, Punta Negra and up to the Placencia/Independence area. On Friday, members of the press toured the reserve at the invitation of the Belize Coalition to Save Our Natural Heritage and TIDE.

We spoke to long-standing fisherman Toribio Parchue, also known as Sandy, for his perspective on the area he has called home all his life. He says that even though it is getting more difficult to catch fish successfully, he welcomes the restrictions placed and believes that had they been implemented sooner his life could have been easier.

The Reserve, stretching for 160 miles, encompasses three zones, a general use zone that allows regular fishing and tourist visits; a conservation zone where stocks replenish, and a preservation zone where absolutely no activity beyond research is allowed. 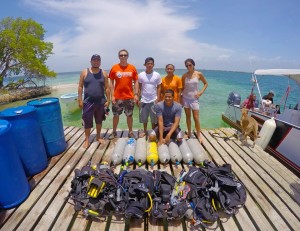 Despite these, the Reserve continues to face direct threats, according to TIDE Protected Areas Manager, Mario Muschamp, including damage to beaches, seagrass and coral beds, sweeping up of fish with gill nets and others.

In Punta Negra, the seaside community has been dealing with heavy beachline erosion. Village councilor Ray Jacobs says they will bring in boulders via barge to hold back the sea along the 12-mile coastline, of which almost ten has been eroded up to 65 feet from its original position.

The concession belonging to Providence Energy that covers the entire reserve is not currently active.