Fairly Dry Weekend across the country of Belize

Robbery in the old capital 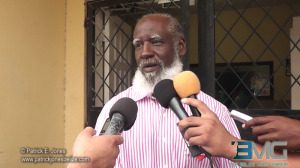 Friday, July 24th, 2015. BMG: Joining the plea for Foreign Affairs Minister Wilfred “Sedi” Elrington to resign, is COLA, after recent statements made by the minister in regards to the Belize/Guatemala territorial dispute and taking the matter to the ICJ. Geovanni Brackett, the president of COLA, said that they are completely disgusted with the way the minister has addressed questions about the border issue and that COLA has called for his removal continuously but the Prime Minister continues to endorse Elrington.

Brackett went on to say in his interview that because of these recent statements made by Elrington, COLA will seriously consider recalling the minister, and though it may be a difficult task, they want to remove “Sedi” from Cabinet and Government to protect the sovereignty of our nation.

Brackett also had a chip on his shoulder about the way Minister Elrington addressed the construction of the Coast Guard Forward Operating Base on the Sarstoon Island, saying that there is no need for the OAS’s stamp of approval because that is Belizean soil that we are building on.

Brackett compared the situation to that of owning a piece of land and needing to build something on it to show ownership and avoid losing it. He said that Belizeans have always been taught that we own 8,867 square miles and now Minister Elrington is telling us that we don’t own that much or we’re not sure, so we have to wait for the OAS.

Brackett ended his statement by saying that Elrington’s comments about not being sure of how much land belongs to Belize, should discourage even the people who wanted to take the chance of going to the ICJ, as it could be used against us as material evidence.