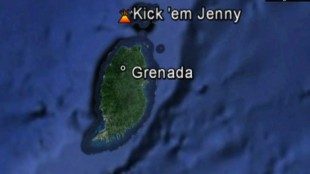 Sunday, July 26, 2015. BMG: The threat level from the underwater volcano Kick ‘em Jenny, located north of Grenada, has been raised to orange, which is the second highest warning notice, meaning the volcano can erupt in less than 24 hours. 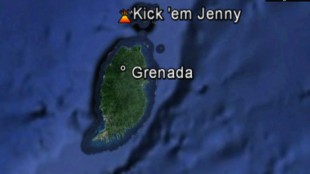 Kick ‘em Jenny began showing signs of activity on July 11 and has been responsible for more than 200 small earthquakes since then, making the surrounding area of the volcano a danger to ships. Although the volcano is 600 feet below ocean surface, scientists saw it necessary to create an exclusion zone for ships to navigate at least 3 miles away from it to reduce risks.

Degassing from Kick ‘em Jenny was responsible for the country’s worst maritime disaster when it erupted in 1994, sinking a ship and killing more than 60 people. The underwater volcano has erupted 12 times since 1939 when it was discovered, with its last eruption being in 2001.

The threat of an eruption causing a tsunami is also present but scientists say that the biggest danger is faced by ships since a tsunami caused by an underwater volcano would be small and would only affect nearby islands.