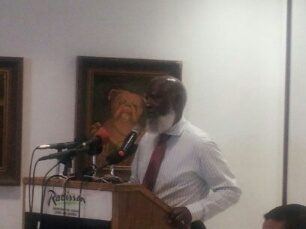 Monday, July 27, 2015. Aaron Humes Reporting: Today the Ministers of Foreign Affairs of Belize and Guatemala were together at the Radisson Hotel under the auspices of the Organization of American States (OAS). It is the start of a “Belize-Guatemala” week, a planned operation of the OAS to bring greater understanding of the countries’ territorial differendum and the efforts to solve it. 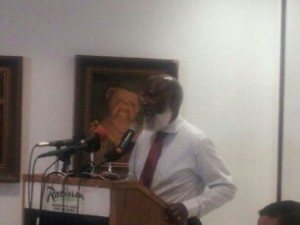 And barring a miraculous return to negotiations, that solution is the International Court of Justice (ICJ) in the Hague, Netherlands. Belizean Foreign Minister Wilfred Elrington explained that the ICJ was envisioned by the British as the final solution, with Guatemala only recently acquiescing. Belizean politicians had introduced face to face negotiations which did not work, and now many of the top ones believe the ICJ is the way to go subject to approvals in referenda, simultaneous or not.

And while both countries are waiting for the final go-ahead from their people, the Minister says life goes on in both countries, which are working together as never before. Belizeans live, work, go to school and use Guatemalan services as they do here; Guatemalans regularly become Belizean citizens and work in our industries.

His Guatemalan counterpart, Carlos Raul Morales, who has extensive experience with Belize, made clear that Guatemala believes it can build a friendship with a nation who was never its enemy. All Guatemala wants, he told the journalists and diplomats present, is to live as neighbors with Belize and work together on common problems. 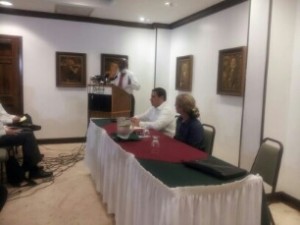 The forum to be hosted by the OAS will take place on Tuesday at the Bliss Center for the Performing Arts.

And in related news, to cement Guatemala and Belize’s friendship, as one of his last acts before leaving office, Guatemalan President Otto Perez Molina is making a state visit to Belize in December. He was here last year for the SICA summit in Placencia and to sign 13 bilateral agreements with his Belizean counterpart Prime Minister Dean Barrow. President Molina is term-limited and steps down in January after elections in Guatemala later this year.