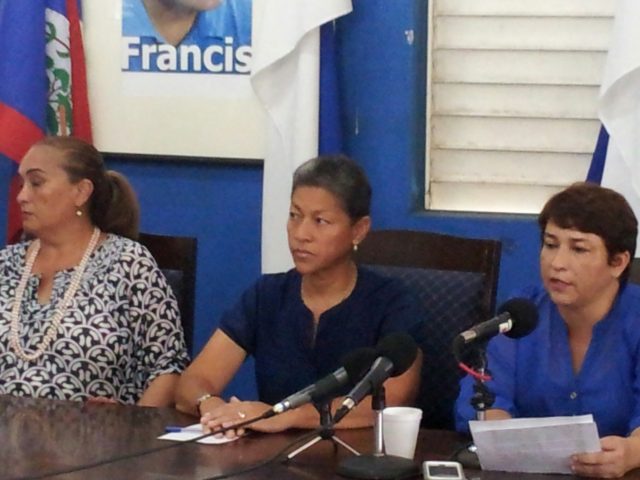 Monday, July 27, 2015. Aaron Humes Reporting: This morning there was a strange press conference called by the People’s United Party (PUP) in Belize City. As the political opposition and a potential Government, the All the standard bearers spoke, but Senator Shoman offered us the best summation of what they said: the women of the party are stepping forward to take their place at the table and, with the support of leader Francis Fonseca, would go on to address national issues squarely. With that established, we turn to a pressing issue, the report by the Police Department that there is a growing level of domestic violence and personal conflict leading to murder and serious injury.

The Department is working on a strategy to address the issue, but Senator Shoman told us it does not go far enough, and that the PUP has some ideas of its own which the Government has been refusing to listen to. The domestic violence and personal conflict issues are part of a greater crime wave swamping Belize that needs special bipartisan attention, she argued.

Hon. Balderamos-Garcia issued the call for the party to come together and turn its focus to national issues and away from internal disputes. The party annually issues a Women’s Agenda offering its take on issues as it relates to women. They also had some “woman fum-fum” for Channel 7’s Jules Vasquez, who was chastised for reportedly sending operatives to “spy” on a meeting at the residence of Balderamos-Garcia and also at the home of Myrtle Palacio.