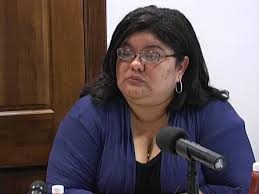 Wednesday, July 29th, 2015. BMG: Chair of the Belize Anti-Trafficking Committee (BATC) and CEO in the Ministry of Human Development Judith Alpuche has hit back at a report released this week by the U.S. State Department which downgraded Belize to Tier 3, which threatens country funding.

Alpuche told News 5 that the report does not reflect the level of work done by Belize to address trafficking in persons, which has participated in training of frontline personnel in all Ministries and Departments to properly address legislation and trafficking activities.

She says the Americans were invited but did not show up to the training.

In Alpuche’s view, the report focuses too much on prosecution and conviction for offenses, which she says are the end of a long process and are not as easy to acquire as believed.

She says this has been a complaint of Belize’s for some time as the country has only just started to go after traffickers and their enablers.