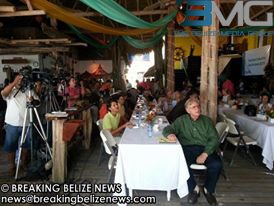 Saturday, August 1st, 2015. Aaron Humes Reporting: SAN PEDRO TOWN – With 9% growth in the overnight sector and 62% in the cruise tourism sector, a temporary slowdown in overnight arrivals in the first half of 2015 is not enough to dent the confidence of Belize’s tourism partners and stakeholders. The Annual Tourism Industry Presentation, being held here at Fido’s Courtyard, has been expanded to a full-day conference offering continuing education in tourism topics – this year,

service excellence and tourism digital marketing. But its primary purpose is to provide a report on the past year’s activities by the Belize Tourism Board (BTB) and look ahead to the coming year.

Director of Tourism Karen Bevans says the Board has been moving quickly to address key concerns including crime and security and marketing Belize as a tourism destination outside of the usual destinations such as the United States and Canada, the latter of which was responsible for lower arrival figures due to a devalued currency. In this regard, she told reporters, it is important that Belize seek new partners, such as COPA Airlines, which opens a route through Central and South America. $1 million has been committed to marketing in Europe and South America as part of welcoming COPA to Belize.

In the north, Belize is already enjoying a version of the “Southwest Effect,” as airfare prices have dipped below US$500 from major hubs in the U.S.

Even with the threat of American Airlines cutting back flights or sending smaller planes and reestablished American relations with Cuba empowering that island’s industry, lower airfare is expected to lead to more hotel occupancies.

The Board itself, according to Bevans, has been operating within budget and enjoys the confidence of tourism partners.

So on the anniversary of the establishment of the Holiday Hotel in San Pedro, the recognized start of tourism here, Minister Manuel Heredia Jr cited the following as reasons for Belize’s growth which outperforms regional rivals: a collective industry increase in standards; strategies allied with competencies,

Allowing that the BTB can always do more, Belize Tourism Industry Association (BTIA) president Osmany Salas says they have been doing a good job and have been leading the way in ensuring that Belize stays ahead of its rivals.

He did warn of continued conflict between the cruise and overnight sectors, citing the Norwegian Cruise Line (NCL) project at Harvest Caye near Placencia as an example – the operators there, he says, must be ready to face the

challenges that come with increased business from cruise ship visitors.

And on the local front, Bevans says the Board’s recent decision to partner with local operators is already paying dividends.

The six-month program features a different section of the country each month starting in July with special discounted rates and packages available.

The Annual Tourism Awards will be held here later this evening.