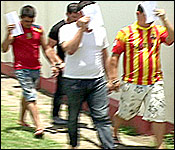 Friday, August 7th, 2015. BMG: Acting on intelligence, Belmopan Police arrested 4 Cubans yesterday, August 6, and seized more than 7 pounds of cannabis on a bus traveling from the western border to Belmopan.

Around 1:00 p.m, police received a tip and immediately sent a team to intercept the bus, where they arrested Keyren Arguelles, Pedro Tehera, Pharrel Sanchez and Yorda Perdomo who were later charged for illegal entry into Belize.

On the bus, officers also found 2 packages containing just over 7 pounds of cannabis which was labelled as found property since it could not be linked to anyone in the bus.