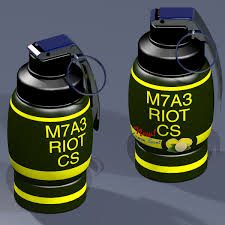 Saturday, August 8th, 2015. Aaron Humes Reporting: A CS gas grenade was apparently found on the third floor of the Racoon Street Police Station, which serves as official headquarters for Eastern 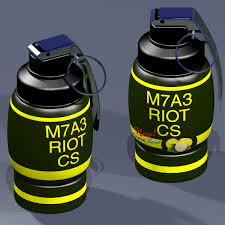 Division (South) and previously for all of Eastern Division in Belize City, on Friday evening.

The building had to be evacuated around 3:30 after the grenade was found inside a drawer in an office on the third floor above the main offices and conference room.

Commander of the Belize Defence Force and bomb expert Brigadier General David Jones told PLUS TV of Belmopan that he was called in around that time and retrieved the material without incident. He described the grenade as the type used in riot control that emits CS gas, or “tear gas.”

It posed no danger to the police but was nonetheless taken away to be stored at BDF headquarters, Price Barracks, Ladyville.

Last year police recovered grenades in the area of Banak and Mayflower Streets around the 10th of September. Approximately fourteen grenades are still missing from a batch lost from the BATSUB compound in 2004, also in Ladyville.