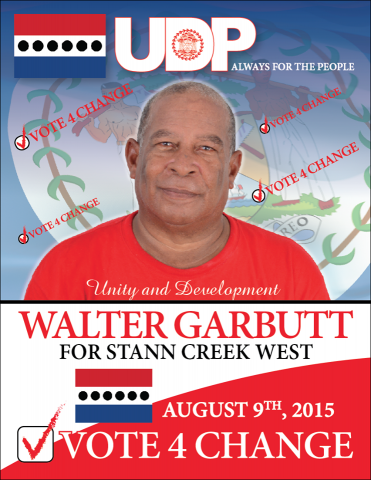 Sunday, August 09, 2015. Aaron Humes Reporting: After what party chairman Alberto August described as the biggest convention held by the United Democratic Party (UDP) in the division of Stann Creek West, Walter Garbutt, a retired teacher, was elected as standard bearer for the party in the division, with 1,563 votes cast out of 3,163. 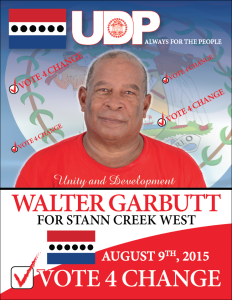 In brief remarks broadcast over party station WAVE Radio, Garbutt, Young and Williams gave thanks to their supporters and the party secretariat for a successful convention and the latter two offered their support to the new candidate. Supporters were told to “stay focused” on “beating the enemy.”

Garbutt admitted to being “impressed” by his rivals’ performances – none of the three has been a candidate before – and noted that he would continue to need their support and those of his own campaign team as the race to the general election begins.

Garbutt now faces incumbent Rodwell Ferguson of the People’s United Party in the general election. He replaces former standard bearer and area representative Melvin Hulse, who resigned after a recording appeared before the Dangriga by-election in which he was heard to criticize and allegedly libel party leader Dean Barrow.