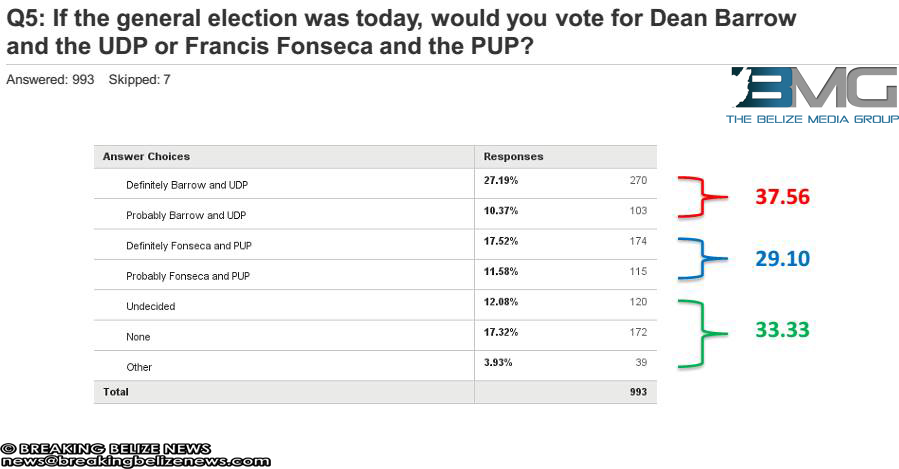 Tuesday, August 11th, 2015. Aaron Humes Reporting: Prime Minister Dean Barrow and the United Democratic Party (UDP) are favored to win the next general elections if they were held today, according to the first in a series of planned independent surveys conducted by the Belize Independent Development and Research Group (BIDRG).

BIDRG hosted an online survey of 1,000 persons between August 1 and 8, 2015, designed, in its words, to “check the pulse of the Belizean electorate over the course of the next few months, as the country approaches its most important General Elections ever.”

The following questions were asked:

1) Would you rate your chances of voting in the upcoming general elections as excellent, good, fair or poor?

3) What is the single most important problem facing Belize today? That is, the one you would like to see resolved by your elected officials. (one answer only)

4)  Do you think Dean Barrow has done his job well enough as Prime Minister to deserve re-election or do you think it is time to give a new person a chance?

5) If the general election was today, would you vote for Dean Barrow and the UDP or Francis Fonseca and the PUP?

6) Is the person who is the leader of a political party important in making your decision to support that party in an election?

7) What is your view of Dean Barrow as a leader of the UDP?

8) What is your view of Francis Fonseca as a leader of the PUP?

9) If a credible alternative/third party existed, would you actively consider supporting such a party instead of the UDP or PUP? 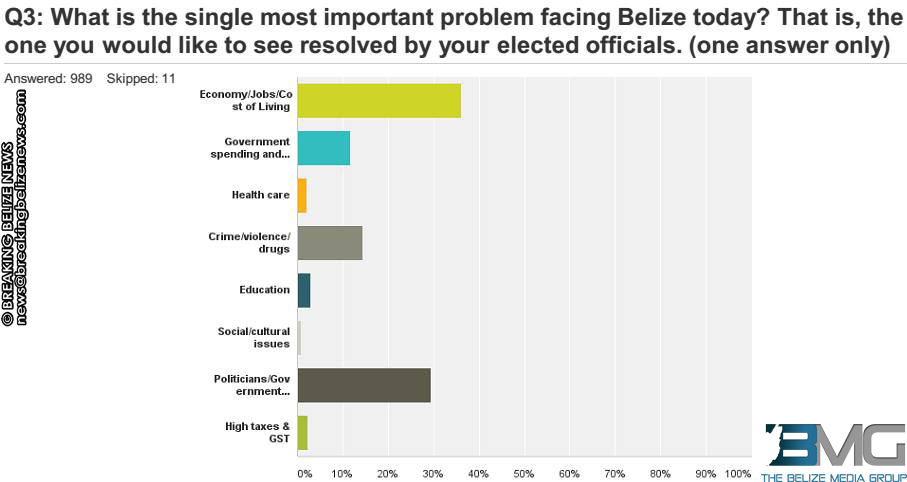 A majority, 55%, believed the country is headed in the wrong direction; 27% said they believed it was on the right track, and the remainder were not decided.

“It’s the economy, stupid!” said 36% of respondents when asked to select the single most important issue facing Belize that could be resolved by elected officials. 29% want those elected officials to clean up their act in relation to corruption and ethics issues. Crime came next at 14.7%; government spending and debt at 11%, and education, taxes and health care all ranked at about 2% each.

Nearly 55% of respondents would like to see someone new at the helm as Prime Minister; 32.56% preferred Barrow to be re-elected for a third term. The Prime Minister, appointed by the Governor General, is typically the leader of the political party with the most seats in the House of Representatives or a majority (currently 16 of 31). No Prime Minister has served more than two terms since the post was created in 1981.

However, the parties are separated by just ten points in terms of decided votes at a general election – 27 percent UDP to 17 percent PUP. Combined with probable votes those numbers rise to 37 percent UDP and 29 percent PUP. 12 percent are undecided, 17% would not vote at all and 4% would vote for other persons or parties.

65 per cent of respondents said the political parties’ leadership is important in shaping their vote; 25% said it was somewhat important.

Third parties may have support for coalition

And where are the third parties or alternative political movements in all of this? Well, it appears they may be able to get support if they come together. A single credible third party or alternative movement would probably be considered by 40% of voters and definitely considered by another 38%, with just 21% saying they would stick to the two major parties.

Belize Independent Development Research Group (BIDRG) is an independent private and non-profit consultancy group. In its release issued this afternoon, it states, “The results and analysis provided are authentic and directly reflect the aggregate views of the respondents who participated in the survey. BIDRG will not provide analysis other than what is contained in this summary.’

All replies were collected via an online web portal, the link publicized by social media such as Facebook and Whatsapp in a first for a poll of its kind. Only one response was allowed per computer or device and input was totally anonymous, the group says.

View the poll in its entirety here: https://breakingbelizenews.com/wp-content/uploads/2015/08/BIDRGPoll1Data_Final.pdf