Four charged with drug trafficking in the Old Capital

Belizean mother, daughter and boyfriend killed in Florida; may relative be responsible?

The Mexicans are coming to Belize to take on Premier League champions Real Verdes Football Club and Belize’s striker Deon McCaulay at the FFB Stadium in Belmopan next Tuesday, August 18.

Previewing the match, Major League Soccer (MLS) website mlssoccer.com wrote that Queretaro is “embarking on a journey into the unknown as far as the club’s history is concerned, but are still the prohibitive favorites to get out of the group given the talent resources at their disposal….On the opposite end of the spectrum are Verde’s, who may be the weakest squad in the tournament but will be keen to throw a wrench into the plans of any team that goes to Belize thinking they already have a win in hand.”

The Green Machine, led by Deon McCaulay is the David in this encounter with “Goliath,” Queretaro, better know as the Los Gallos Blancos.

The game kicks off at 8pm on Tuesday August 18th at the FFB Stadium. 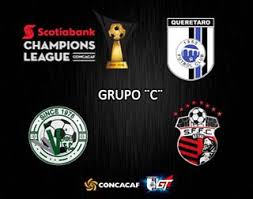