Will Government “keep an eye” on BTV? 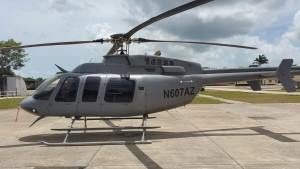 Thursday, August 13th, 2015 Aaron Humes Reporting: A Bell 407 helicopter found in the Blue Creek area last Wednesday remains under guard at Price Barracks, Ladyville. But is it a case of “finders, keepers?”

Minister of National Security John Saldivar told 7 News there is a time period for whoever left it behind to come and claim it, but when that time passes, it becomes “found property” and reverts to the Government of Belize, as an asset of the Belize Defence Force (BDF); however, the case remains under investigation with no leads showing at this time.

The BDF is preparing for the acquisition of two simialr helicopters from Taiwan later this year and expect that this one, if it is not claimed, will be handy for the Force.

Saldivar completely dismissed any suggestions that the chopper may have used to transport Mexican fugitive, Joaquin “El Chapo” Guzman. Ministry officials loosely estimate that the chopper is valued at one million US dollars.

A full assessment of its air worthiness has not been completed.