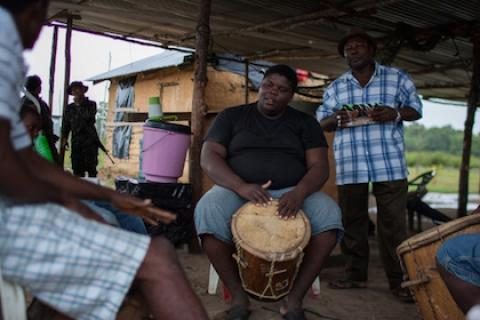 Monday August 17 th, 2015.  Aaron Humes Reporting: The Garinagu people of Atlantic Honduras have banded together to fight the continued encroachment and expropriation of their land.

Independent journalist Jeff Abbott, writing for Portside, says projects funded by the U.S. Government for investment in Central America are just a cover for multinational corporations to invest in development projects that damage the natural communities created centuries ago. Additionally, the Garinagu face persistent threats from narco-traffickers and others intending to claim their land as their own.

A proposal by U.S. Vice President Joseph Biden, in January, to provide Central American governments with a billion U.S. dollars for investment additionally to previous aid agreements, is to be voted on later this year. 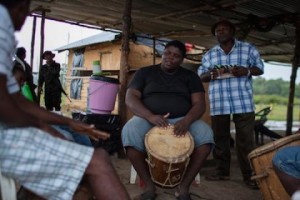 According Angel Castro of Vallecito, Honduras, the Garinagu are in fact facing eviction from their titled properties so that the capitalists can be satisfied.

Title to 2,500 acres of land given by the Honduran government in the 1800’s is held collectively and forms the basis of Garinagu life in the Atlantic Caribbean provinces of Cortés, Atlántida and Colón.

However, the government has been systematically selling property to developers interested in projects in the area.

Garinagu have taken up nonviolent resistance to defend what is theirs and insist that the tourism projects cropping in the area have no support from them.

As for fighting the drug traffickers, Honduran soldiers are posted to the area but not within the community leaving them still vulnerable to continued threats.

“The state is illegally selling our lands,” one person said. “We are facing the systematic eviction of Garifuna communities for foreigners to buy our lands to build massive hotels.”

The communities have started their own self-sufficiency projects, which work to keep youth and women interested in staying in the community and not open to migrating to the U.S. or elsewhere.

At no point, though, have the Garifuna communities ever been consulted on the use of their land. The state has countered that the communities do not fall under the groups protected by the convention. But the communities have maintained their demands to be consulted.

The Garinagu have also reached out across borders, to the nascent Black Lives Matter movement in the U.S., which has pledged continued solidarity.///