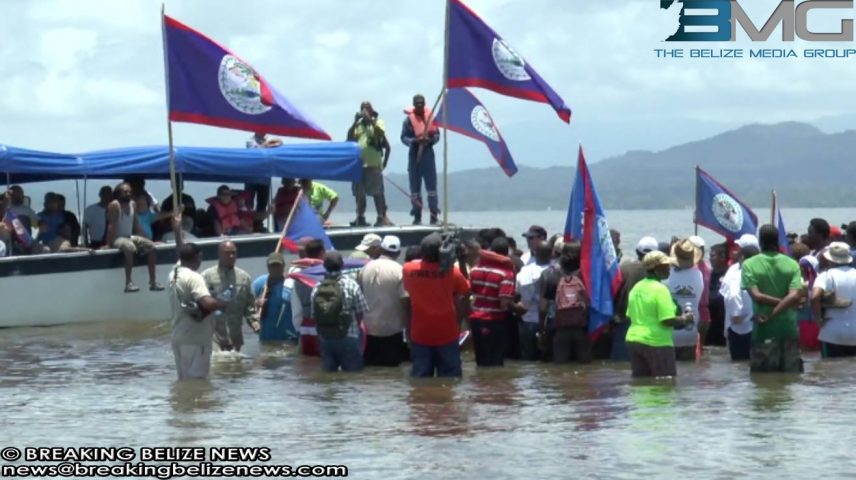 Monday, August 17th, 2015. Aaron Humes Reporting: A statement by the People’s United Party expresses its solidarity with and pride in those 200 Belizeans who

travelled to Barranco and to the southernmost boundary of Belize.

They demonstrated in a clear and unambiguous manner that we have every right to travel to any part of Belizean sovereign territory and that the independent spirit of Belizeans is alive and assertively proud, even in the face of foreign aggression.

The party states that Belizeans who travelled to the Sarstoon demonstrated, by their peaceful presence, the ineffectiveness of the current administration in asserting our national rights and upholding our sovereign dignity.

The trip was a political statement—that Belize, all of Belize, from Rio Hondo to Sarstoon, from our Cayes and Atolls to our Western border, is ours to protect and defend, and that this is not a task for only the military and diplomats.

The PUP cites the misspeak by Guatemala’s Foreign Minister on military bases which was corrected by Opposition figures rather than the current government,

and accuses the Government of trying to “scold, shame, intimidate, frighten, and prevent Belizeans from making this trip, to no avail. They tried to stop boat captains from taking their vessels and threatening not to renew licenses.

They spoke out against the presence of women, children and the territorial volunteers and everyone else in attendance before eventually abandoning them to their fate.

Then after the fact, they issued a self-serving press release to cover their naked and cynical act of abandonment. We are thankful that our brave Belizeans returned home safely and we salute them all.”

A further statement will be made at a press conference on Tuesday.