Land Of The Free – An Open Letter to Minister of Foreign Affairs, and collectively, our Cabinet

Goal keeper, Benito Moreira, was named the best player in tonight’s game as he held his grounds and vigorously defended the goal post for his team, Real Verdes.

After 96 minutes of heated football action, the game ended in a nil-nil draw, and Real Verdes walked away with the first point in the Scotiabank CONCACAF Champions League. Hundreds of fans came out to witness the new, motivated, and energized Real Verdes Football Team which showed that Belize is now moving up to the big leagues.

Real Verdes next game will be against Gallos Blancos from Queretaro, Mexico on September 17, 2015 and then against San Francisco FC from Panama. 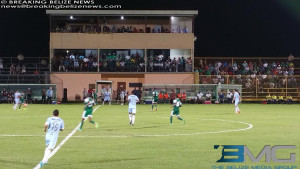