Judge a man by his results 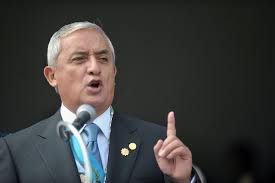 Monday, August 24, 2015. BMG: Speaking to his nation on television, Guatemalan President Otto Perez Molina insists he had no link to a customs bribery scandal, had not received money from same and thus will not stand down from his presidency, which expires next January. 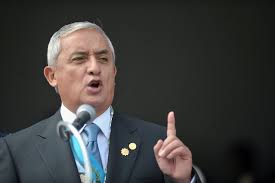 The former military leader, according to the BBC, insisted that his conscience was clear.

Eight members of his government have resigned over the allegations and a former vice-president has been arrested. On Sunday, the agriculture and health minsters became the latest to resign.

President Perez Molina said he “will fully submit myself to the legal process.” His comments followed a late-night cabinet meeting held behind closed doors at the presidential palace.

Anti-corruption protesters have held daily demonstrations in the capital calling for the president to step down.

On Friday, former Vice-President Roxana Baldetti was arrested on corruption charges three months after she was forced to leave office. She is accused of taking part in the same bribery scheme.

Nearly 30 other people have been detained, accused of taking millions of dollars from businessmen who paid bribes in order to avoid higher import duties.

Presidential elections are being held in early September, but electoral law bars Perez Molina from standing for another term. The elections are expected to go to a second round of voting, later in October.

Meanwhile, the Secretary General of the Organization of American States (OAS) Luis Almagro, has “expressed concern over recent political developments in Guatemala, including calls from various sectors of society to postpone the elections scheduled for September 6.”

The OAS leader says that Guatemala should proceed with next month’s presidential election “under the existing constitutional order” and according to a June 15, 2015 resolution adopted by the OAS General Assembly in support of the electoral process in Guatemala.

“The Secretary General reiterates that citizens have the inalienable right to express their will through the ballot, thus ensuring the continuity of the democratic process in Guatemala,” says Ambassador Almagro.

Information from the BBC was used in this report.