Friday, August 28, 2015. BMG: Traffic accidents remain a major cause of fatalities in Belize, with an average of fifty-six since 2011 and four in the last two weeks alone from 4 traffic accidents.

However, planners are aiming as part of the Belize Road Safety Project to reduce those figures to zero by 2030. This week, the various traffic departments, Health, Education and Emergency personnel from around the country discussed what the draft master plan currently looks like, and how it should be improved towards final implementation.

Errol Gentle, CEO in the Ministry of Works, summarizes the view of these stakeholders: “Toward zero death means, we do not accept that fatalities and serious injuries on our roads are inevitable and acceptable and that is the reason why we refrain from saying accidents, because one would believe that accidents is bound to happen. Whilst most of road crashes or collisions are done because of faults of the drivers.” 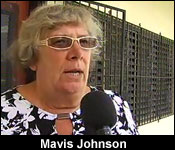 “Certainly I am a frequent traveler here, not quite often as I was, but it doesn’t mean to say I am not busy working on what’s important to Belizeans and over the last year I have worked on developing what I think would be a plan to carry us forward beyond where we are now right to 2030.”

The project is funded by the Caribbean Development Bank and GOB and according to Chief Transport Officer Crispin Jeffries has already brought about some successes: “Certainly the impact of enforcement along the highway as well as infrastructure has been seen and felt. We’ve seen a reduction in the fatalities; we’ve seen an improvement in the road infrastructure; we see road markings, road signs, curves marked, shoulders being developed.

There is a lot that has happened in the infrastructure side. There are five components in the project; actually this is a three-year project that runs until 2016. From the successes we’ve seen, we see the introduction of new ambulances as a part of the post-crash. We see the significant amount of educational programs as a part of the education component.

There’s a lot of training that is taking place in terms of management, the capacity building side of it. And there is also the public relations campaign. There is that phase that is to kick in and then there is still some parts of the components related to enforcement that we will see some advance training for officers.

The training components have seen a lot of things including defensive driving training for drivers and many ministries of the government service and many private sector organizations taking on some initiatives and taking on the lead to see that some of these things take place in the private sector also.

So there is a lot that has rubbed off, so to speak, on the private sector and the community. We are seeing a significant amount of participation.”