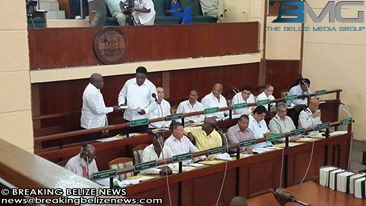 Frank “Papa” Mena is taking his oath of allegiance as a new member of the House.

Mena thanks his friends, family and supporters for their belief in him. He thanks Dangriga for standing firm with him.

He said the time to unite is now and pledged to continue serving his constituency to the best of his abilities.

Several bills are being introduced today including the Electricity Acquisition Settlement Act and the Fortis Inc and GOB Settlement deed.

The House of Representatives has approved two supplementary appropriation bills for the government which are The Supplementary Appropriation 2015/2016 Bill for $80 million and The General Revenue Supplementary Act 2, which is just a continuation of the first for the same said amount of money.

The CDB Belize Education Sector Reform Program II Loan Motion 2015 is a US $35 million to finance various projects in the education sector.

The IDB George Price Highway Rehabilitation Loan Motion 2015 is a US $27 million loan to finance the improvement of the highway between Belmopan and Santa Elena.

The House has been suspended while standing committees review the bills that have been tabled.

In particular, the Electricity Acquisition Settlement Act, the CDB Belize Edication Sector Reform Program Loan Motion and the IDB George Price Highway Rehabilitation Loan Motion are under review to be passed through all its stages at today’s Sitting.