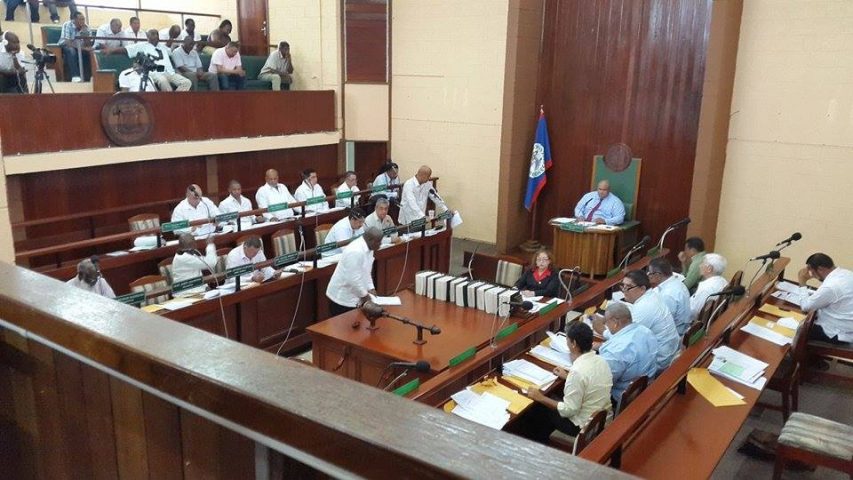 Wednesday, September 2, 2015. BMG: Prime Minister Dean Barrow opened the debate on the BEL settlement by saying that the introduction of the Electricity Acquisition Settlement Bill is a vindication of the government’s policy.

Barrow said his administration maintains that the utilities of the country must be owned by the people of Belize.

He added that at the time before the nationalization in 2011, GOB demanded felt the need to safeguard the stability of the economy and were overwhelmingly supported by the Belizean public.

According to Barrow, Fortis’ withdrawal of their claim at the Caribbean Court of Justice (CCJ) solidifies and underlines that BEL will always belong to the people of Belize.

He then hurled criticism at the People’s United Party (PUP) for their questioning of the success of the settlement.

Citing the BZ $70 million and the 33.3 percent of shares given back to Fortis, Barrow said that is the totality of the cost and assured no side deals have been made.

PUP Leader Francis Fonseca said while he welcomes the settlement of the BEL settlement the government has taken a hypocritical stance.

Fonseca reminded that it was the same government, which has now made the settlement, that chastised and aggravated the situation.

According to Fonseca, GOB had originally offered to sell Fortis the 70 percent of shares they nationalized for BZ $75 million and has now settled for $70 for 33.3 percent, plus millions more in legal fees.

He estimated the actual compensation value to be around $133 million. He also claimed that all compensation paid from BEL to Fortis will be exempt off taxes.

PUP Area Representative for Fort George, Said Musa accused the government of blatant nepotism saying that the Prime Minister’s brother Dennis Barrow has benefited handsomely by handling the legal aspect of the settlement for the government.

Musa said Barrow and Company Law Firm has benefited from assuming legal counsel on numerous settlements on the government’s behalf.

PUP Area Representative for Belize Rural Central, Dolores Balderamos added that since GOB has taken control of BEL there has been no major improvements to the company’s service.