Four charged with drug and firearm offenses in Corozal Town

Guatemalans demand accountability of politicians, not so much in Belize 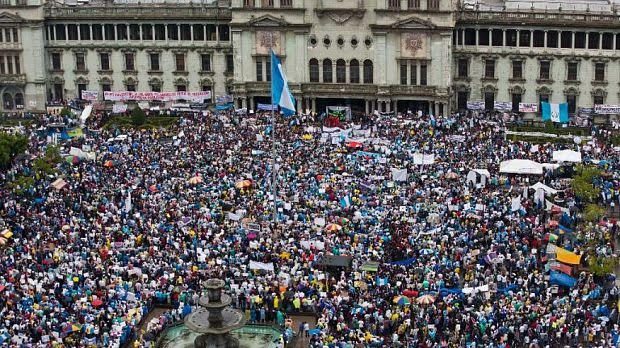 Thursday, September 3rd, 2015. BMG: Guatemalan President Otto Perez Molina has resigned from his office after a judge issued an arrest warrant against him in connection to a growing corruption scandal that has put the country into a political crisis.

And while the impact, if any, on Belize is yet to be seen, Guatemala has managed

to do something Belize hasn’t been able to do, which is to hold an elected official accountable for his actions by stripping him of his position and taking him to court.

Guatemala’s former Vice President Roxana Baldetti, who was first implicated in the customs fraud scandal, has already been arrested and forced to vacate her seat amid the growing pressure from thousands of Guatemalan voters.

Belize has never come close to this kind of public pressure for political reform despite calls from various groups and individuals calling for the government to sign on to the United Nation’s Convention Against Corruption (UNCAC).

The UNCAC was introduced as the world’s first legally binding anti-corruption instrument. It is an eight-chapter document that obliges member states to implement several anti-corruption measures that may affect their laws, institutions and practices.

To date the UNCAC has been ratified by 168 countries worldwide as of September 2013, yet Belize has not ratified the convention even though it is a member state of the UN and has ratified many other UN conventions. Belize and Suriname are the only two countries on the Western Hemisphere mainland that have not signed and ratified the UNCAC.

Belize is however, signatory to the Organization of American States (OAS) Inter-American Convention Against Corruption (IACAC). Last year the OAS review body of the IACAC, the Mechanism for Follow-up on the Implementation of the Inter-American Convention against Corruption (MESICIC) visited Belize and met with officials from various oversight bodies before making a report and offering recommendations to the government.

In that report MESICIC recommended that the government provide more resources and independence for the Office of the Auditor General, restructure the Public Accounts Committee (PAC) and appoint an Integrity Commission because failure to do so would undermine anti-corruption efforts.