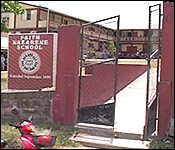 Saturday, September 12th, 2015. BMG: Since Monday of this week, the teaching staff at Faith Nazarene Primary School in San Ignacio has been on strike due to allegations against the school’s principal, 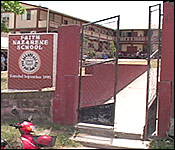 Policarpia Pech, who is said to be abusive to students as well as teachers, among other things.

This strike by the teachers caused the more than 400 students to miss out on a week of classes as mediation between education officials and the school’s staff was not making any headway.

That was until yesterday when the teachers were finally convinced to resume classes on Monday, September 14, after a lengthy meeting involving Management, the Teachers Union, the Education Ministry Officials, Principal Pech and the teaching staff.

That agreement consists of Ms. Pech applying for long leave and then whilst on long leave, applying for a transfer, which herself, the teaching staff and education officials are hoping is granted so that the dispute is permanently resolved and things can go back to normal at Faith Nazarene Primary.

Raymond Sheperd, General Manager of Faith Nazarene Primary, told the media that the situation is still tense but as mature and professional people, the teaching staff and Principal Pech will have to compromise during the rest of the negotiation process.