GOB to go ahead with Vesting Act for FCIB 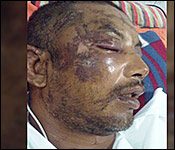 Tuesday, September 15, 2015. BMG: A man in the Chan Chen Village of Corozal District was almost beaten to death yesterday, September 14, by one of his own relatives who claims that the 42-year-old victim, Mark Villanueva, was trying to steal his weed-eater during the wee hours of the morning.

According to a family member, Villanueva was sleeping in a camp on his farm when a male person from a neighboring farm, got into his camp and knocked him out before pummeling him half to death and dragging him to the other farm. Villanueva, who only had on underwear and no shoes at the time, managed to see the face of his aggressor before being knocked out. The attacker, who was later apprehended, admitted to police that he extensively beat the 42-year-old because he was allegedly trying to steal a weed eater.

Villanueva’s relative who spoke to the media, said that the aggressor was angry when Villanueva decided to stop working on his farm last week because he was being underpaid, and that anger later led to the horrific beating which caused him to be admitted into the Karl Heusner Memorial Hospital (KHMH).