Groundbreaking for Ecumenical Chapel at K.H.M.H.

Thieves stopped from going after another Health Ministry Hilux 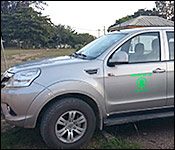 Tuesday, September 15, 2015. BMG: Exactly one year ago, Minister of Health Pablo Marin told reporters that it appears there is “mischief” behind thefts of motor vehicles from his Ministry’s offices in Belmopan, opining that somebody or a group of persons may be working together, possibly to sell the stolen vehicles.

365 days later the thefts and attempted thefts continue, and the latest one was stopped by fortuitous timing. Ten days after the last theft, a Futon Tunland pickup parked at the Western Regional Hospital compound was hit by two men. ound 9:00 Sunday night, the security guard on duty saw the men but they spotted him first and dashed off. On checking the vehicle the guard discovered attempts to remove the fuse box and console below the steering wheel; it appears the thieves may have been trying to disable a tracking device.

Only the signal indicator was damaged and the vehicle was secured.