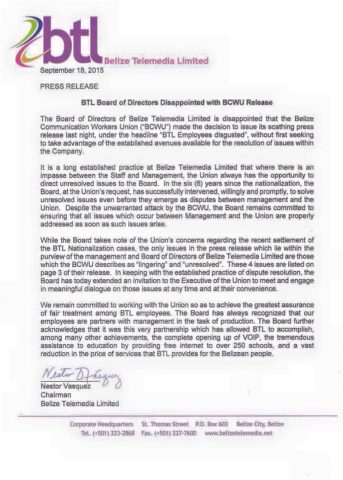 Saturday, September 19, 2015.  Aaron Humes Reporting: A press release under the hand of chairman of Belize Telemedia Limited (BTL), Net Vasquez, declares the company “disappointed” with the decision of the Belize Communications Workers Union (BCWU) to air it 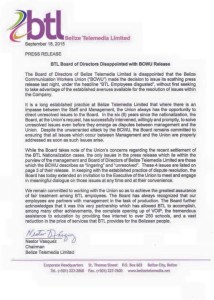 s grievances on the BTL settlement with former owners publicly rather than come with their concerns to the Board of Directors.

The Union’s disparagement included the observation that they were never a part of the process despite having a vested interest in the company in the person of shares held by the BTL Employees Trust. They branded the current administration no different from the previous one and even worse for being underhanded.

But it is the Union which has erred, says BTL, by not taking advantage of the established avenues to settle disputes, choosing to launch instead an “unwarranted attack” on their company’s leaders.

Nonetheless, the Board welcomes such dialogue although it essentially says that the BTL settlement is not really any of the workers’ concern; their listed issues on the press release, however, are.

The company closed by reminding that the “partnership” of employees and management is responsible for many of BTL’s successes.

An Annual General Meeting of shareholders is scheduled for September 29 in Belize City, amid reports of continuing falling revenue.