“Monchi” denies knowledge that recording would be aired at memorial 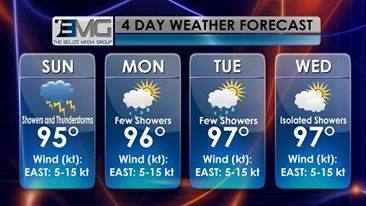 Saturday, September 19, 2015.  BMG:  The General situation is for warm and mostly dry conditions to prevail throughout the country. There will also be some moisture and instability increases across the country later tonight.

The 24-hour forecast is for cloudy spells today with isolated showers and a few thunderstorms. Some rain will affect inland areas later this afternoon, moving to the south and the coast by tonight.

Winds blows to the east at 5 to 15 knots. Sea state remains choppy.

Temperatures for today are expected to be as follows: Inland 99 degrees F. in the coast 92 degrees and in the hills 84 degrees.

The extended forecast up onto Sunday is for cloudy spells with some showers and possible severe thunderstorms mostly over the northern and inland areas. Thunderstorms could be accompanied by damaging winds. 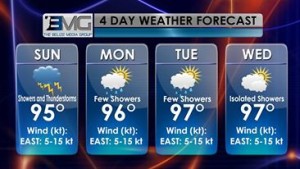