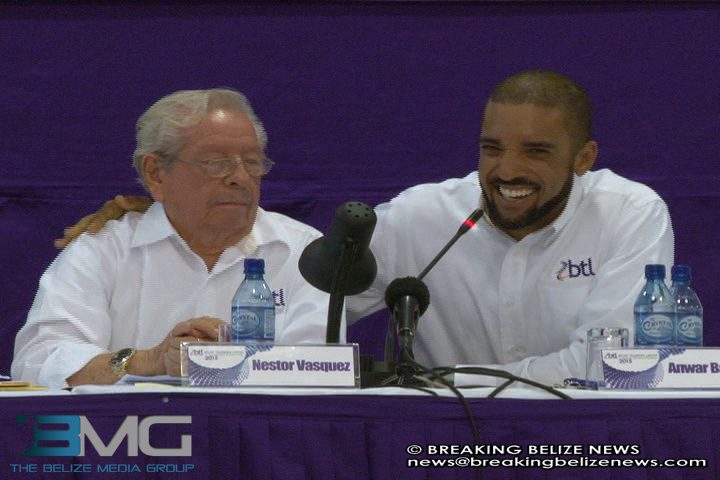 network and continuing to build its customer base as well as revamping its internal culture.

But as far as the company’s financial status is concerned, the bottomline is still not nice reading for shareholders, who have seen profits decline for the fifth straight year, which also means a slight reduction in dividends. Board chairman Nestor Vasquez blamed increasing depreciation costs and the company promised to better manage its capital expenditure.

Shareholders received 23 cents per share in dividends, down a cent from last year. Chairman of the BTL Executive Committee Anwar Barrow says he is not overly concerned, as the telecom giant is going through the teething pains of a re-organization of its commitments, values and ideals.

According to Barrow, BTL’s own surveys reveal it is still the leader in both existing and emerging markets, testament, he says, to the company’s hard work over the last year in reaching all customers.

Vasquez compared this year’s profits to those immediately realized before the takeover of the company in August of 2009, which stood at about $19.9 million. The difference, he stated, is the $200 million in capital investments over the last six years which has yielded a stronger base for BTL to work from. In other business news from the meeting, Eric Eusey was re-elected for a one year term as “publicly elected director” and auditors Pannell Kerr Forster were also reappointed.

And while BTL re-positions itself to take on new challenges, the company is struggling with the millstone of the British Caribbean Bank loan debt which Government acquired along with the assets of the company in 2009 and 2011.

Originally BZ$45 million, a studied ignorance of the loan which the company contends was illegally made has ballooned the payment to more than twice that amount, approximately BZ$97 million.

With Government having settled with BCB, it has proposed a novel way of recouping its costs from its state-owned company. Board Chair Net Vasquez reported to shareholders that GOB would allow BTL to service treasury bonds covering $48 million of the debt.

Treasury notes typically provide low rates of interest and can be rolled over as needed. Later, Anwar Barrow made a startling revelation: Government is not – at least, not immediately – seeking the entire payment. The remainder would be placed in what he called “an indefinite moratorium” – the Government would decide at its own leisure how to take care of the rest.

And according to Vasquez, the former owners left the loan in default after extending it beyond its original repayment period from four years to five; BTL, he said, could not afford the added cost.

Vasquez also charges that with the monopoly held by the Ashcroft Group and the Accomodation Agreement, BTL’s hands would have been tied for the foreseeable future.

But the questions remain. At the time of takeover would it have been easier to pay then because the other course of action led to the company taking a risk and losing? Wouldn’t it be true to say that BTL is worth next to nothing because of the liabilities on its balance sheet? And why did Government agree to sell shares to SSB, Belizeans, etc., at a more inflated price than they were originally worth at nationalization?

These questions we had intended to put to either Vasquez or Barrow, but neither man was willing to grant an interview after the close of the AGM. In response to a question from Christopher Coye during the meeting, Vasquez said they awaited the auditors’ determination of how to treat the facility on BTL’s books.

Also coming up at the BTL AGM was the question of labour relations. Even as the company seeks the buy-in of employees to a “Culture Change Initiative” designed to get them used to competing for the company, a scathing press release was issued two weeks ago by the Belize Communication Workers’ Union (BCWU) concerning their being left out of the discussions regarding the settlement with the former owners, followed up by a lunchtime protest two Fridays ago.

The company hit back, asking to meet with the workers to discuss their concerns while expressing their disappointment at going public in that manner. Anwar Barrow maintained that the current relationship between staff and management was cordial and excellent.

There is a meeting planned for Wednesday evening at the St. Thomas Street compound where Prime Minister Barrow will speak about the settlement to workers and other issues will be discussed.

According to Net Vasquez, the employees are not being punished for speaking up.

The Union had plans to meet among its members to discuss further action but have not reported back to the public as promised.