Regional ICT development conferences to be held in Belize

Wednesday, October 7, 2015.  BMG: After being locked up in a Mexican prison for more than four years  from 2011 to 2015, then being transferred to the Belize Central Prison to serve another three years, 31-year-old Errol Haynes appeared before Chief Justice Kenneth Benjamin yesterday, October 6th, represented by attorney, Hubert Elrington who will be helping him with his lawsuit against the Commissioner of Police, Superintendent of Prison and the Attorney General for “wrongful imprisonment”.

Haynes asked for immediate release from the Central Prison on the grounds of his detention being a breach of the constitution and that there are no records to prove that he was convicted on October 4th, 2013, in court for drug offences.

The case was adjourned until Friday, October 9th since the original copy of the committal warrant could not be presented. 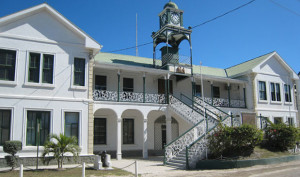