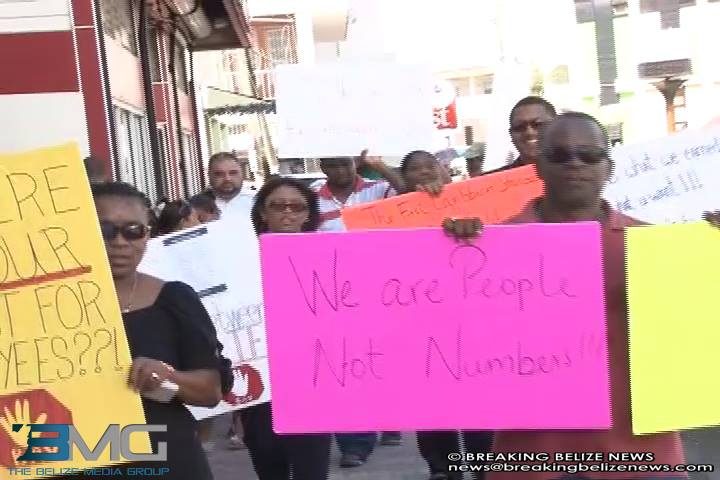 Friday, October 9, 2015.  Aaron Humes Reporting: They will not be employees for much longer, but the workers of First Caribbean International Bank (FCIB) across the country have had new fear pressed into them by the response of their employers to their actions in the last few week. 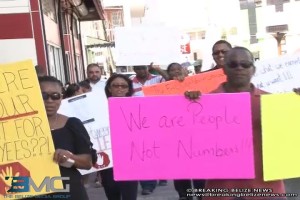 Today, while they still remain employees, they conducted protests today countrywide following the release of a statement from their employer accusing their negotiators, the Christian Workers’ Union, of refusing to cooperate with the Bank to negotiate the exit package for 60 workers who will no longer be with the Bank when it transfers assets to Heritage Bank.

In its own release, the Union defended its stance, saying its employees were kept fully abreast of and approved all its decisions.

CWU president Audrey Matura-Shepherd joined the protest of workers in Belize City at lunchtime and said that she does not have neither the time nor the inclination to respond to the Bank’s erroneous statements.

However, Matura-Shepherd went on to dispute almost every statement the Bank made in its release. She said the notice of strike action for an essential service such as the banking industry is the only trump card workers have as they face an impossible future.

The Bank has refused to negotiate without the notice being lifted, but the employees both refuse to allow that and have restrained the Union from seeking, again, the interventions of Labour Commissioner Ivan Williams, who they think is politically motivated and not understanding of their concerns. The FCIB’s protests in Belize City took place between 7:00 and 7:30 a.m. and noon and two in the afternoon. Matura-Shepherd says the workers are resigned to their fate but determined to fight to the bitter end.