Truck stolen by Guatemalans in San Ignacio, no checkpoints to help 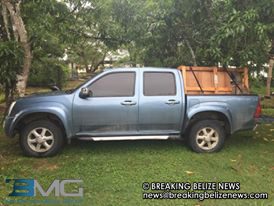 Saturday, October 17th, 2015. BMG: The police memo ordering all checkpoints to be inactive until after election stirred up many conspiracy theories regarding political motivations behind the order from the 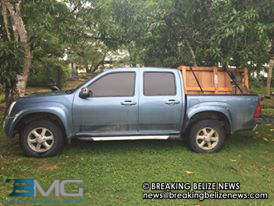 Since those orders have been in effect, several crimes have been reported that could be attributed to a lack of checkpoints, the latest incident being last night in San Ignacio when Nigel Espat was held at gunpoint and his 2007 Isuzu D-Max pickup truck was stolen.

Espat was exiting Sunset Bar after socializing and while going to his vehicle, three Guatemalan men approached him, pointed a gun at him, took his keys and drove off in his D-Max in the direction of the Guatemala-Belize border. Espat was able to quickly gather a group of relatives and friends to set chase after the thieves who were on the Bullet Tree Road when the D-Max got stuck in mud and they fled on foot.

The vehicle was then recovered by its rightful owner about three kilometers from the border. Espat, the owner of 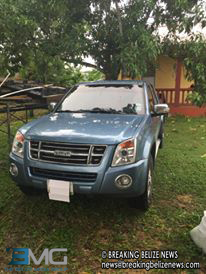 Belize Auto Zone, had merchandise in the pickup bed, including multiple new windshields for his business that were all destroyed during the chase. Espat’s iPhone was also taken by the thieves.

A resident of the area contacted BMG after the incident and wrote: “The police checkpoint on the bullet tree road has been removed and therefore residents of the area are concerned about their security.”

BMG managed to get in contact with Espat and one of his upset relatives who told us that the checkpoints have been removed in order for Guatemalans to come into Belize and vote in the upcoming general election. He added that the police spoke to him and told him that if they weren’t ordered to stand down from checkpoints, the thieves could have been stopped at the one in the Bullet Tree Road or they could have shot the tires.

No significant damage was done to the vehicle and Espat now has it back at his home.