How will social media impact the upcoming general election on November 4th? 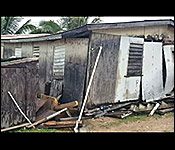 Tuesday, October 20th, 2015. BMG: Over the weekend, flooding in the old capital caused damages to many neighborhoods and cause many homes to collapse, 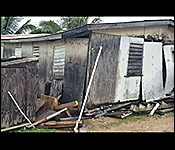 fortunately though, no lives were lost. Some residents though, escaped death under seemingly miraculous circumstances, especially 9-year-old Earl Gentle Jr. who was trapped beneath rubble after the house he was in, fell on top of him.

At the time of the incident, a social gathering was happening inside the home and that, along with other factors, such as old wood and the pouring rains, is believed to have caused the collapse, almost taking the life of the young boy who managed to escape almost unscathed.

Earl Gentle Sr., the boy’s father, told the media that it is a miracle his son survived after he had to be pulled out from beneath the wreck by family members.

When asked if any politicians had offered to lend assistance, Gentle said that Cordell Hyde, Mark King and a member of the third party contesting in the Lake-I area have already been in contact with the family and assured them that help is on the way.