As elections near, the promises pour

Friday, October 23, 2015.  BMG: The United Democratic Party (UDP) and People’s United Party (PUP), this week, both released their respective manifestos making many promises in an attempt to appeal to the voting public one last time before general elections, less than two weeks away.

Each party’s plans and goals for the next five years, if elected, are outlined and though some points were similar in certain areas the parties differ greatly on certain issues.

The manifesto launches were held simultaneously on Wednesday morning. The UDP launch of its 40-page document was held at the Biltmore Hotel and the PUP held its launch at Independence Hall.

The PUP’s manifesto has generated a lot of discussion among supporters and critics because of some of the promises included in it. A few of the more notable promises include free education and lowering and getting rid of some taxes.

Some of the other promises in the manifesto include repealing the gun law and the PetroCaribe Loans Act; getting rid of the Gang Suppression Unit (GSU), providing house lots to each Belizean upon the age of 18; rolling out National Health Insurance (NHI) countrywide; and providing free education for every student from pre-school to sixth form.

Critics have argues that many the goals are unfeasible and unrealistic, and that the promises are nothing more than election hype but PUP Party Leader Francis Fonseca said he believes the party could realistically achieve all the goals they set out.

UDP Party Leader Dean Barrow, on the other hand, said that the 44-point document lacked the ability to immediately attract grassroots people, but added that the proposed reforms would assure the people of his party’s 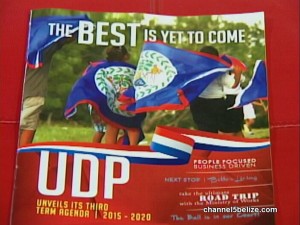 resolve for good governance. The UDP’s promises are more moderate, having been hardened by the last two terms in office. Critics have argued that the UDP’s manifesto doesn’t promise much more than continued infrastructural work and a few legislative changes.

In regards to transparency and accountability, the PUP has promised to install the 13th senator, and reconstitute bodies such as the Integrity Commission and the Public Accounts Committee (PAC) to ensure effective oversight of public funds.

Barrow, however, has been maintains that reconstituting either of those oversight bodies where the government would no longer posses the majority control would be crippling to government. He added that no such configuration would ever happen under his UDP government.

Instead, the UDP has proposed four bills: The Public Procurement Bill; The Finance Management Bill; The Public Sector Investment Bill; and The Public Debt Management, State Guarantees and Lending Bill, which will all seek to strengthen governance, accountability, and transparency in public financial administration, Barrow said. And while the manifesto outlines how each bill would benefit in certain areas it is very limited on details as to what each piece of legislation might look like.

The PUP also promised free education for all students up to tertiary level. Fonseca explained that as a former Minister of Education he carried out an exercise to determine what free education to citizens would cost the government. 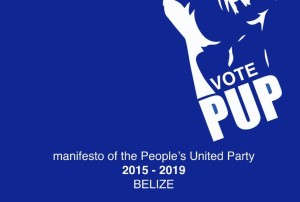 “It would cost about $3 million more at primary school, $8 million at high school and around $12 million at tertiary level because tertiary level education is the most expensive. The accurate picture is that we are looking at something like $23 million in addition to the existing education budget to meet that commitment, which is absolutely achievable”, he said.

Minister of Education, Patrick Faber, in his remarks said while the UDP would not promise free-education, as a matter of feasibility, it would promise to construct 35 new schools countrywide from pre-school to high-school, develop an institute for Science and Technology, develop and institute for Enterprise and Innovation and expand Internet penetration to 50 percent countrywide.

Much of the UDP’s manifesto was heavy on promises of continued infrastructural works. Of the 44 commitments contained within the manifesto, 10 of them were directly related to infrastructure, including: an upgrade to the Phillip Goldson H ighway, and expansion of the Goldson International Airport, the construction of a new air port in Ambergis Caye, the construction of three new hospitals, 35 new schools, and the development of the Commerce Bight Port.

Most notable of the infrastructure projects, is the commitment for the construction of the forward operating base for the Belize Coast Guard on Sarstoon Island.

The PUP’s manifesto focused more on reducing the cost of living, making handsome promises including: phasing out income tax for the working class; creating 25,000 meaningful jobs; lowering the General Sales Tax (GST) from 12.5 percent to 10 percent; increasing the minimum wage to $4 an hour and not less than $200 per week.